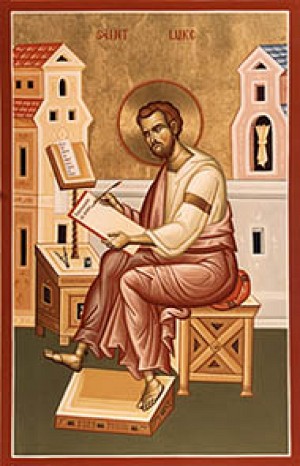 On October 18 in the Holy Orthodox Church we commemorate the holy Apostle and Evangelist Luke. Luke was born in Antioch. In his youth, he excelled in his studies of Greek philosophy, medicine and art and became a physician. During the ministry of the Lord Jesus on earth, Luke came to Jerusalem where he saw the Savior face to face, heard His saving teaching and was witness to His miraculous works.

Luke was numbered among the Seventy Apostles and was sent to preach throughout the world. With Cleopas, he saw the resurrected Lord on the road to Emmaus (Luke 24). After the descent of the Holy Spirit, Luke returned to Antioch and there became a fellow worker of the Apostle Paul and traveled to Rome with him, converting Jews and pagans to the Christian Faith. He wrote three icons of the Most-holy Theotokos—one of which is protected by the nuns of the Antiochian Orthodox Christian Convent of Our Lady of Saydnaya in Syria. He also wrote icons of the Holy Apostles Peter and Paul. Hence, Luke is considered to be the founder of Christian iconography.

In addition to his Gospel written in AD 60, Luke wrote the Acts of the Apostles and dedicated both works to Theophilus, the governor of Achaia. Luke was 84 years old when the wicked idolaters tortured him for the sake of Christ and hanged him from an olive tree in the town of Thebes, in Boethia.